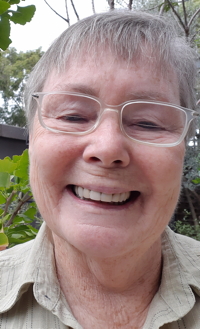 4!  I grew up in a very sexist home, schools, and local environment.  From this very young age I knew it was wrong that I had to wait on my two brothers and my father, that I could not ride my bike outside the gate but they could, that they could eat ice cream to ‘build muscle’ but I couldn’t because I would get ‘fat’!  Etc.!  Etc.!  It was the same at my school – so nothing else for it – I became a rebel known for my ability, still in evidence today, to ‘talk-back’!  It was many decades later before I knew this was the roots of the radical feminism I cherish today.

I have devoted a large portion of my life to bringing up four children with feminist values, and now work to similarly influence my 10 grand-children, and 3 great-grand-children.  At the same time I was a member of the Women’s Electoral Lobby in Canberra, and later and currently in Matrix Guild in Victoria.

My career has been devoted to the welfare of girls, women and their families.  I have been a  teacher, psychologist, community leader, advocate, CEO and manager; working for decades in child development, stopping violence against women, work and family balance, adoption support services, foster care and residential services, and within the disability sector.  Currently I volunteer for the Office of the Public Advocate in mental health facilities.

I have worked in New Zealand, Western Samoa, Australia and the Maldives.  I have worked with Aboriginal colleagues and families and I deeply respect Aboriginal sovereignty and have a strong commitment to First Nation’s peoples and all diverse cultures and lifestyles.I became a lesbian in 1980 and have worked for radical feminist lesbian causes for 40 years now.  It is an honour to continue this work with my colleagues and members in Matrix Guild years. She believes lesbians have a unique perspective and culture that needs protection. She joined the Matrix Guild Committee to help organize club events. She brings creativity and planning skills to the committee.

to contribute to the welfare of lesbians. She is a proud lesbian and has been a feminist since, as a young child, she was disturbed by the inequality between herself and her brothers. Many times, being told that she couldn’t do the same activities as they did because girls weren’t allowed to. She has supported women’s causes by attending events, marches, and rallies.

Michelle has a 25-year history working in the non-profit sector. Her primary experience includes fundraising in organisations dealing with preventative health, mental health and community welfare. As a lesbian woman she is focused on ensuring that her rights and all women’s rights are not compromised as they age and that a voice is given to the needs of older lesbians in the community. She is particularly interested in maintaining a community for ageing lesbians. She is aware that as we age our world shrinks and feels that Matrix Guild holds a vital role in keeping a strong lesbian community thriving for its members.

Michelle enjoys cooking, reading, spending (perhaps too much) time on her iPad! She shares her home with her partner and two cats. She also loves to travel but, of course, that will all be virtual for the near future.

Charmaine has been a lesbian feminist most of her life. What began as socialising with like-minded lesbians who supported the women’s movement in Perth, her urge to find others like her, took her to Canada in her early 20’s. Here she met and belonged to a group of black lesbian feminists, who advocated for women of colour within the feminist dialogue. Charmaine was able to witness the operations of black lesbian separatists and their call to duty for many women oppressed by way of race. Acknowledging the intersectionality of race, gender and sexuality Charmaine was fortunate to attend various events and rallies coordinated to voice these challenges.

Charmaine now lives in Melbourne and works as a teacher in a disadvantaged school. She focuses on improving the lives of all students, but has worked closely with Koorie students enhancing their schooling experience.

In joining Matrix Guild, Charmaine reflected on her core values, that it is integral to build and support a local community for lesbians over 40 to thrive in through a sense of connectedness, community and compassion. She would like to see membership increase, and believes the Matrix Guild is the perfect organisation to foster a collective sense of belonging for all Victorian lesbians.

In her spare time, Charmaine likes to cook and spend time in her garden. A love of travelling, she enjoys exploring new places, hiking and snorkelling. Her favourite dish to cook is a curry, being from Goa, India. Charmaine has been enjoying resurrecting some of her grandmothers traditional Goan recipes. Her partner enjoys her cooking as much as she does, and she is joined by a newly arrived mother and son cat.